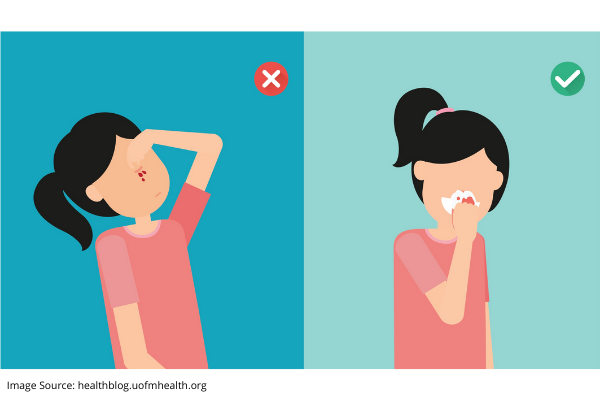 The nose is located in an unfortunate protruding position on our face and more susceptible to trauma and injury. It’s also rich in supply of tiny blood vessels that are very close to the surface and help in humidifying and warming the air we breathe in; this means that any trauma to the nose can lead to frightful looking nosebleeds.

Though blood on the face can be scary, they are usually not very serious and can be controlled easily at home itself. Only a few nose bleeds are serious and these could be due to very high blood pressure, atherosclerosis or physical trauma. Serious nosebleeds usually originate from the larger blood vessels at the back of the nose, as compared to minor nosebleeds from tiny vessels in the front of the nose.

Most nosebleeds occur when the air inhaled is dry and hot and low in humidity such as in dry climatic areas or during winters when the air is dry and warmed from household heaters. Certain medications like blood thinners (such as warfarin) and NSAIDs that interfere with the normal clotting of blood also lead to significant nosebleeds, even when the trauma to the nose is very minor.

Other factors that could lead to drying out of the nose include cigarette smoking and the use of drugs like cocaine. In children, self-induced traumas caused by nose-picking or inserting foreign objects into the nose also increase the risk of nosebleeds. Alcohol abuse has also been known to render one susceptible to this risk.
Upper respiratory infections as well as allergic and non-allergic rhinitis also tend to traumatize the nose and lead to minor nosebleeds.

Major nosebleeds can result from the presence of tumors, polyps or inherited clotting disorders. Hormonal changes during pregnancy have also been known to trigger off nosebleeds in a few cases.
In the case of a nosebleed, the most important thing is to sit down calmly and bend forward; this allows the blood to flow out safely instead of backwards into the throat and sinuses. Lying down at this point isn’t advised as it would put your heart at the same level as the head and not help in reducing the bleeding time.
Pinch the nose from the soft frontal area for lengths of 5 minutes and breathe through the mouth during this period. Using an icepack at this point is also helpful. Stuffing cotton into your nose to soak up the bleeding isn’t recommended.

If bleeding continues for more than 15minutes, or if the bleeding is excessive and due to some serious injury to the head or face, seek emergency services at the earliest. If you have high blood pressure or if you are on blood thinners, you should see the doctor. Frequent nosebleeds require a doctors attention as there could be an underlying problem.

Usually nosebleeds aren’t a medical condition and just a nuisance, but they should be monitored carefully.