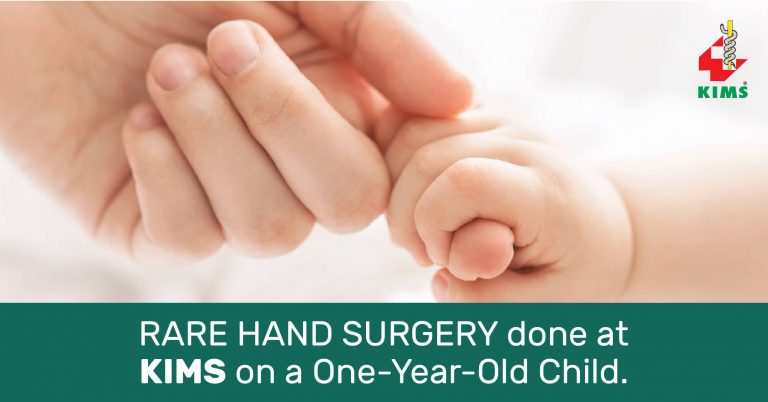 A rare congenital anomaly of the hand, where the central finger is missing along with part of the central portion of the hand leading to a ‘truncated or bifurcated’ appearance called ‘CLEFT HAND’, was corrected on a one-year-old child at KIMS Hospital. The child’s father and grandfather are also cleft handed and were not surgically corrected.

Normally, objects are held between the thumb and index finger, in the region called the ‘thumb web’. Here, in this case since, the thumb web was very narrow or absent, instead of holding objects between the thumb and index finger, the child used the cleft with the fingers on either side, like a pair of scissors in what is called the ‘scissoring grip’. Once this faulty habit becomes impregnated in the young brain, its difficult to train the child back to the normal grasp pattern.

It is at the age of 1, the brain gives signals for the ‘purposeful’ use of the thumb by the child. Up to the age of 2 years, it is said that the brain has ‘plasticity’, and the child can be moulded or trained to get back the normal movements, provided the altered form of the hand is corrected by elegant plastic hand surgical procedures. Hence, in congenital or ‘by birth anomalies’, FORM and FUNCTION of the hand should be regained in the age group of 1 to 2 years by surgical procedures, followed by training of the child to hold objects. This rare surgery was done in KIMS hospital, at the Hand Surgery Department, headed by Dr Manoj Haridas and his team.