SIGNS AND SYMPTOMS OF KIDNEY STONE 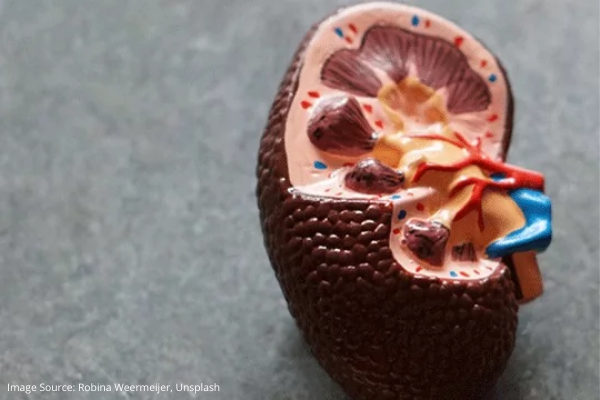 Your kidneys are very important organs in the body; they regulate water content, filter waste from blood, and produce hormones. The urine that’s created after removing waste sometimes contains a build up of salts and minerals, causing kidney stone. Sometimes, the build up is made up calcium, ammonia, uric acid, or cysteine. Common signs of a kidney stone include:

This is the most obvious symptom of a kidney stone. It usually starts on both the sides of the abdomen and later spreads to the lower abdomen and groin. Some may experience pain in the back, or below the ribs. The pain isn’t constant; it sometimes varies in intensity and shifts to a different location. It alternates between intense pain that lasts for a few minutes to up to a few hours, and a mild ache. This is because muscles around the ureter contract and relax as the stone moves around through the urinary tract.

Nausea and vomiting are other commonly observed symptoms of a kidney stone and occurs in about 50% of patients. The nerves involved in the obstruction process are linked to innervations of adjacent organs- cross activation of these nerve fibers causes nausea and vomiting. 1 They are also caused by an effect on the vomiting center of the brain.

Frequent urination is a common symptom especially experienced after you have passed a kidney stone. This is the backflow that was held back by the obstructing stone. When the stone passed out, all of this urine comes out. But before the stone is passed, frequent urination could mean that a stone is obstructing the flow. You can experience severe burning sensation while urinating. And sometimes it bleeds because of the stone scratching the kidney or the ureter.

Ignoring these symptoms could lead to kidney infection. This occurs when the waste eliminated by the kidney blocks up causing a build-up of bacteria. Also known as Pyelonephritis, kidney infections are potentially life threatening and caused by bacteria like E. coli and klebsiella. Some of the common symptoms of a kidney infection include:

Fever usually occurs in a few hours after an infection. You’ll feel absolutely sick, shivery, and experience back pain.

This is a symptom common to that experienced during a stone, only slightly worse.

What To Do When You Experience These Symptoms:

Contact the doctor immediately if you experience any of the above symptoms. You’ll need to be treated immediately with antibiotics to stop the infection spreading to the bloodstream. The doctor is likely to prescribe antibiotics for a few weeks. As for the stone, a lot depends on the size of the stone and the position of the stone. If they’ve passed into the ureter and causing severe pain, the doctor may recommend hospitalization. And if they’re very large, you may be suggested ureteroscopy, open surgery, or shockwave lithotripsy.