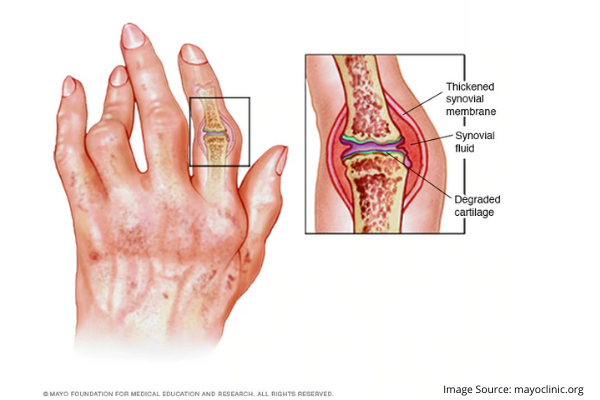 What is Rheumatoid Arthritis?

When explained in simple terms, rheumatoid arthritis refers to a swelling in the joints. It could either affect the joints of both or either side of the hands, wrists and knees. It could also affect the fingers, toes, hips, and shoulders. This is an autoimmune disease where your body’s immune system attacks its joints. While rheumatoid arthritis can affect people of any age, it usually develops among people over the age of 40 and is common among women.

Doctors are not sure about the causes of this disease- it could either be due to the fact that a virus or bacteria could affect the immune system causing it to attack the synovium, or the lining of the membranes surrounding the joint. This causes the membranes to inflame and thicken, and finally destroy the cartilage and bones within the joints. At a later stage, the joints lose their alignment. This is a genetic disease and is compounded by lifestyle factors like smoking, obesity, and exposure to asbestos and silica.

These include swollen joints, inflammations and redness in the joints, fatigue and weight loss, and stiffness in the joints, especially in the morning. You may experience low grade fever. And during periods of intense pain (also called flare), these symptoms may increase.

How Are They Diagnosed?

Diagnosing rheumatoid arthritis isn’t done through a single test, but a combination of different tests. These include x-rays, blood tests (to look for the RF and other antibodies associated with rheumatoid arthritis), physical examination (looking for patterns), and examining patients medical history.

Complications Due to Rheumatoid Arthritis:

At a later stage, rheumatoid arthritis could put you at risk for other problems like osteoporosis, dry eyes and mouth, infections, carpal tunnel syndrome, heart problems, lung diseases, and cancers in the lymph system. The medications prescribed to suppress the problem can make you susceptible to infections.

How To Delay Rheumatoid Arthritis:

As we earlier said, rheumatoid arthritis isn’t curable, but you can delay the problem by recognizing the symptoms and treating it earlier. You can prevent it by altering your lifestyle.